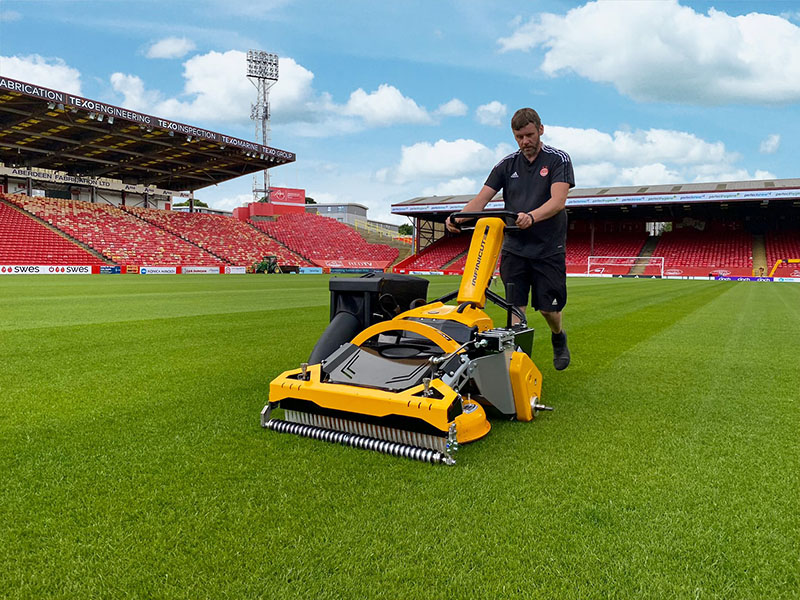 Aberdeen Football Club have made a major step forward in their aim of reducing emissions by 50% by 2030 with the purchase of a brace of battery-powered mowers from INFINICUT®. The combination of an INFINICUT® SM34 rotary and 34” floating head mower form part of a wider sustainability strategy for The Dons – reducing not just their carbon footprint but noise pollution too.

The Club have recently added their signature to the UN Sports for Climate Change framework – underlining its intent to become carbon neutral, and are implementing a plan across all areas of operation to meet this commitment. In charge of this for the fibre-sand stadium pitch is Head Groundsperson David Nicholson, who alongside his team of four are now discovering the many benefits of battery-power.

“From our very first conversation with Bobby McDougall at INFINICUT®, we could see how the purchase of these mowers would be a fantastic step forward in reducing our fuel usage and improving our green credentials” explains David. “Once we’d decided battery was the way to go, it didn’t take us long to settle on the INFINICUT’s® – we had a demonstration of both the rotary machine and floating head cylinder mower and were so impressed that we didn’t look at anything else!”

“We thought the cut quality of our previous petrol-driven machine would be hard to beat but the cut we get from the INFINICUT® SM34, together with the powerful suction, is superb.” Used for the post-match clean-up cut, another thing that has impressed David and the team is the noise – or lack of it – emitted from the mower, equipped with a UXR lithium battery. “Sometimes it would be half an hour or more before we could resume work after a fixture because of media interviews happening around the ground but with the SM34 we can be out and cutting straight away.”

“It’s comfortable to operate and simple to control. We can manually adjust the height of cut really easily and settings such as the walking speed can all be set via the INFINIApp® which means that in the winter, when the ground is softer and the plant is more vulnerable, we can simply slow it right down and achieve a better result.”

Also delivered in July 2022 was an INFINICUT® FL34. “This has been another fantastic purchase and the floating head has without doubt improved the quality of cut and, in turn, had a really positive impact on plant health even in this relatively short period of time.” David concludes, “These machines tick a lot of boxes but ultimately do the job of cutting and presenting a first-class surface better than any other machine we’ve used.”