Five year wait comes to an end as INFINICUT® and UltraGroomer™ combo lands at Durham Cricket! 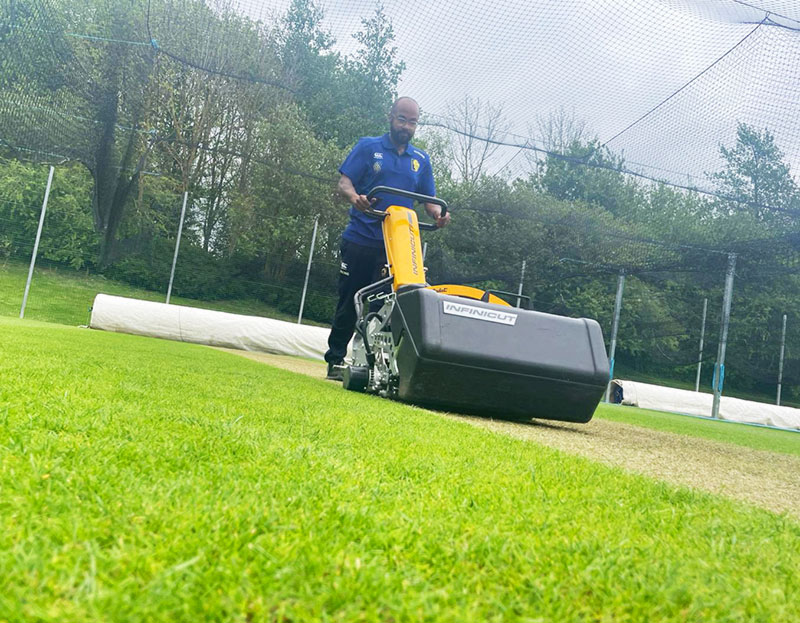 They say ‘all good things come to those who wait’, and for the team at Durham County Cricket Club, they’ve waited almost five years for their very own INFINICUT® and UltraGroomer™ set-up! The combination has been on the mind of Head Groundsman Vic Demain since 2017, so when funding became available, the INFINICUT® was top of the shopping list. Following delivery in March, the INFINICUT® has been living up to expectations – swiftly tackling the invasion of annual meadow grass on the club’s practice facilities.

In charge of preparing surfaces for T20, County and International Cricket, Vic keeps his eyes and ears close to the ground when it comes to new solutions to the key maintenance tasks. “We had the opportunity to use the INFINICUT® complete with UltraGroomer™ for a couple of weeks back in 2017 and were hugely impressed by it, but unfortunately until this year the funding hasn’t been available” Vic explains. Over the COVID period, four units were hired by the ECB to help with preparations for those fixtures taking place behind closed doors, with one of these now finding a new home with Vic and his team of five.

“Having been sold on the UltraGroomer™ from all those years ago, we jumped at the chance to purchase one, together with a 22” INFINICUT® FL. It was delivered just as we began to see the grass thicken up and the annual meadow grass coming through which is where this machine comes into its own.” Featuring over 80 tungsten carbide tipped blades, the UltraGroomer™ from the TMSystem™ range improves the plants immediate environment by removing Poa ingress, lateral growth and organic matter to enhance the movement of oxygen, moisture and nutrients.

“While the Poa keeps growing and seed heads are showing we’ve been conducting fortnightly runs with the UltraGroomer™ and it’s done a fantastic job. We will also be looking to use it for thinning out the sward as part of our main pitch preparations.”

The INFINICUT® also becomes Vic’s first battery powered machine, something that will be in use even more frequently when he receives his new SMARTCut™ cutting reel. “We’re excited for the INFINICUT® to become a dual-purpose machine, with it lining up to be used to cut the main square and practice areas.” Vic adds, “Through the summer we are often hosting meetings and weddings and the last thing they want in the background is noisy mowers! Where we would previously be told to turn them off, with the INFINICUT® we’ll be able to cut the grass without disturbing the guests.”