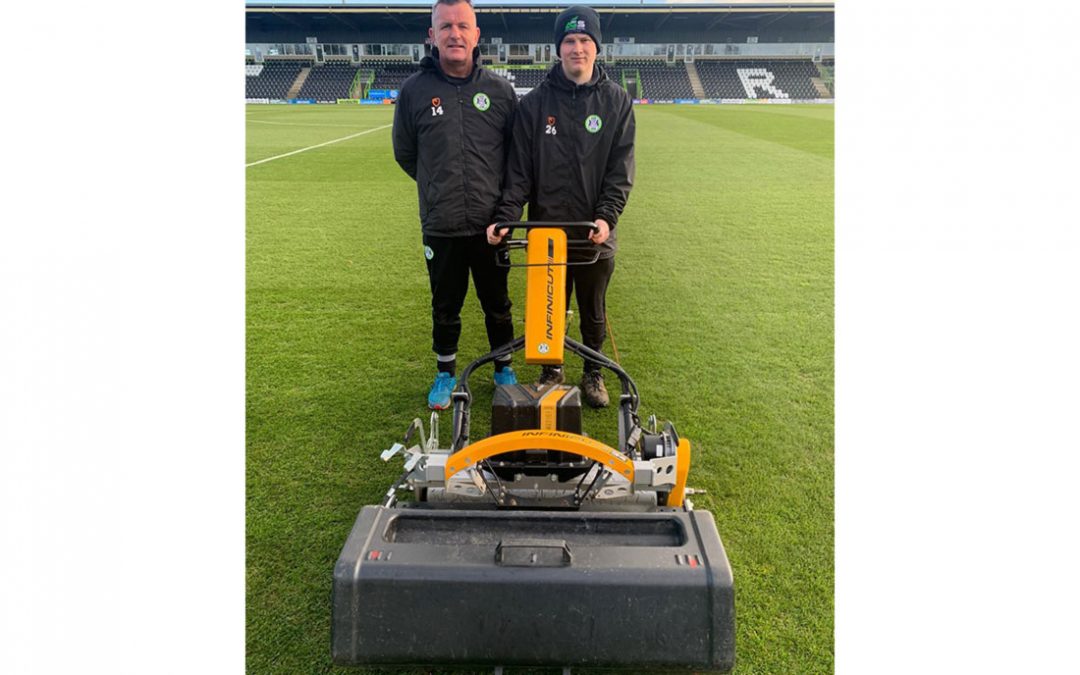 It is perhaps no surprise that the club described by FIFA as ‘the greenest football club in the world’ would turn to battery power when it comes to their choice of mowers. However, what did surprise Forest Green Rovers Grounds Manager Nigel Harvey was the enormous improvements in both operation and finish achieved with the club’s duo of 34” INFINICUT® FL’s compared to their previous petrol-driven units.

Now nine months into his role, and with the assistance of club Apprentice Matt Berry, Nigel’s transition from the Forest Green training ground to the Stadium was a swift and steep learning curve. “I had only used petrol mowers previously and because of the speed of the handover, when I took over at The New Lawn Ground, I stuck to what I knew. That was until Oliver Hall from INFINICUT® came in and did some training with me on the pair of floating headunits and I just could not believe how good they were – I’d been missing out!”

“It’s not just the fact they’re battery powered, which obviously means they’re quiet to operate and aren’t kicking out noxious fumes, but it’s the quality of cut too which is just outstanding. Within the time it took me to mow half the pitch I could tell the definition of stripe and cleanliness of cut was far superior to what we had been using. With fewer conventional tools and techniques at my disposal to tackle issues such as disease control, the balance and adjustability of the INFINICUT® delivers the perfect cut – with no shredding or bruising – to maintain plant health.”

Along with the two FL 34’s, Nigel has also got a range of TMSystem™ cassettes as his disposal including the SarelRoller™ and ThatchMaster™, which will be of particular use in preparing the surface for next season. The club are also looking at add further battery powered equipment to their fleet, with the aim of significantly reducing petrol usage at the stadium.