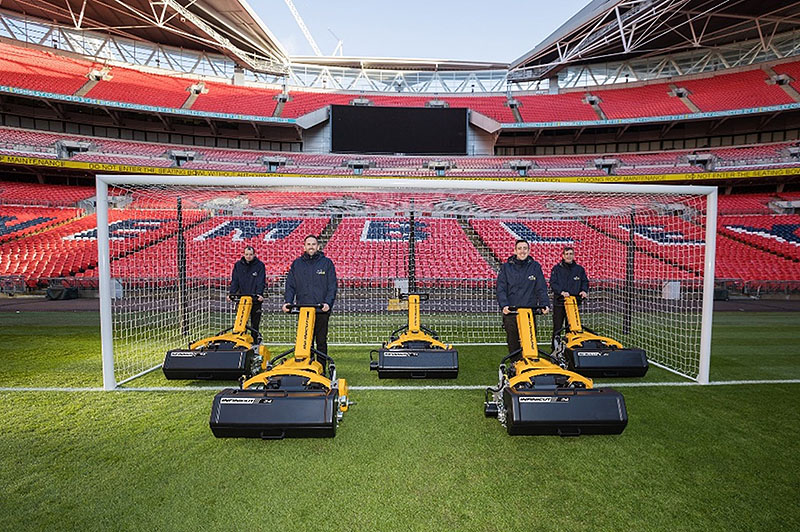 Wembley Stadium, the very heart of English football, is now the home for five 34” INFINICUT® FL mowers. While the INFINICUT’s lithium battery power fulfils The FA’s drive towards increasing sustainability, and saw them make the shortlist, it was the functionality of the floating head units coupled with the quality of cut that sealed the deal for Grounds Manager Karl Standley.

Sustainability has been a key issue for The FA Group since the new Wembley Stadium opened its doors in 2007. The sustainability strategy, governed by FAST – The FA Group’s Sustainability Team – is actively looking at ways of reducing both waste and the use of fossil fuels, meaning that when it came to looking for a new fleet of stadium mowers, the electric route was the way to go. However, as Karl explains, “Having an electric mower is great, but with one of the world’s most iconic pitches to present and a hugely varied schedule of both sports and events, it is crucial that any equipment we invest in delivers from an operational perspective.”

“Lockdown last year gave us the opportunity to really look in-depth at the different options available. Three things really stood out for me with the INFINICUT® machines – one was the battery life; another was the versatility but perhaps the biggest thing was the balance. A football pitch will never be 100% even, there will always be an undulation of a couple of millimetres here and there and with the INFINICUT®, it almost ‘sticks’ to the surface. The floating head reads the pitch, every camber, every tiny movement and the whole team was very impressed by that and it shows in the quality of finish.”

Since taking delivery of the quintet of 34” mowers in the Autumn of 2020, the INFINICUT®s are now the main machines used for preparing the playing surface, primarily down to the cut quality. However, the additional benefits of the battery technology are also making themselves apparent. “We’ve had all five machines running together in preparation for a number of fixtures and the silence in the stadium is evident. It’s an eerily quiet experience – prep has never been quieter – but the difference has also been noticed by our colleagues and the TV crews we have on site.”

Karl adds, “In addition, the massive reduction in HAV for the operators is another important benefit that has come to light. We test all of our equipment annually to enable our team to keep an accurate track on exposure and in the last round of tests, the INFINI’s came out with the lowest HAV score of the equipment we have.”

With the INFINICUT® fleet delivering on all fronts for the Wembley team, the benefits are also due to be felt further down the chain with The FA actively working on finding the previous mower fleet a new home at clubs and organisations at grassroots level.